This Friday, our four Clickers will make the journey down to Surrey to meet up with their fellow competitors for the long trip ahead. This week, Director and Head of Web Ollie has had a switch up, with our Social Media Guru Joe Podmore joining him in the Japanese soft top!

Ollie’s original partner Lee had to let his place go, leaving a space for Joe to jump straight in, let’s hope he packs light! 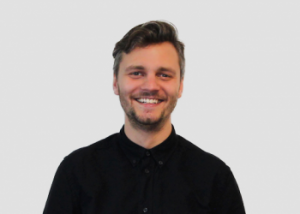 Ollie is no stranger to the track, he loves nothing more than thrashing cars and bikes alike around a variety of circuits, he’s also well versed in sliding off them!! Despite Jake’s bravado, Ollie has no concerns about beating Smooth Booth and the rest of the competitors!

Though Ollie is confident behind the wheel, it’ll be interesting to see how long his music stays on for. It’s not uncommon for his tracks to feature barking dogs in the background, good luck Joe…

Other than his obvious excitement for the driving, Ollie is also looking forward to socialising with the other drivers, alongside a few beers of course. And a few more beers for good measure… Although he’s more accustomed to turning a spanner on a bike, Ollie still feels he could have a good go at fixing anything that goes wrong in his trusty MX-5. Joe and Ollie have a shared affinity for two wheels, it’s a shame the rules call for four wheels as they’d have more space with a bike and sidecar! It seems Poody is looking forward to the cramped conditions, if only to make for a better atmosphere when he plays his self-proclaimed ‘none stop bangers’.

When it comes to track driving, Poody has little experience when compared to his veteran driver Ollie, he does however believe he’s got a trick up his sleeve! Between work and his strict partying schedule, Joe has been clocking up the virtual hours on his beloved Forza 7; he’s certain this will give him an edge over his fellow racers!

As you’d expect, both of our drivers are extremely excited for this one of a kind trip, however, once again Joe seems particularly ready to sample a Belgian Ale or 2  when the teams break for the day! Let this be fair warning to the cougars of Europe!

When it comes to the idea of fixing their car, Poody is quietly confident. His secret? He’s got his Dad on speed dial! Although those handy-man genes haven’t been passed down to Joe, he’s confident that with some Facetime guidance, he can fix pretty much anything!

If you’d like to support our brave Clickers on their fundraising adventure, you can donate here. All the proceeds go to Ben.org, an independent charity and dedicated partner to the automotive industry, providing support for life for its people and their family dependents, with a mission to make a positive difference to people’s lives.