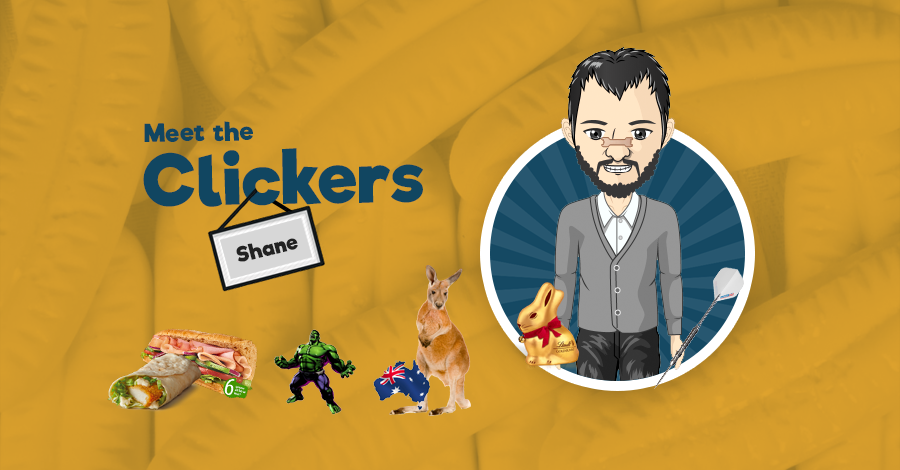 For Episode 43 of Meet the Clickers, we’re joined by angry man Shane! 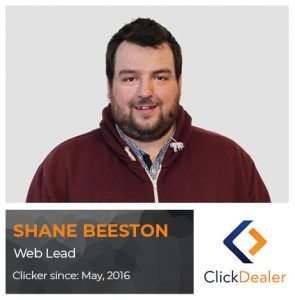 From hating bananas to late night car park walks, he fills us in on it all!

Could you tell us a bit about your Click journey so far? How did you end up here?

I was first brought in to help move the websites to the latest platform. At the same time there was an increase in web changes, so I took the lead on this and started to manage these. As Click grew so did the change requests. While doing this, I was still studying Web Development at University and when I finished Ollie offered me a full-time job and I haven’t looked back since.

I then worked in the Web Changes team for about eight months when Ollie spotted I would be better suited within the Tech department at Click, which was more suited towards my degree, so I was happy. But my journey didn’t stop there. When I first started in Tech I was just doing back-end maintenance tasks, this then lead me to work on a bigger project which is now the new SEO platform and the new blog feature on the websites.

Could you tell us all what your job is at Click?

My current role is Web Lead in the Tech Department. This involves the planning of new features, helping build them and also testing and rolling them out to dealers. I also still have involvement on the maintenance of the websites, and not a single line of code gets pushed to the source code without my approval.

Because of my background at Click I have a lot of involvement with other teams, so I also help out where I can and try to push new technologies forward.

If you could create one law, what would it be?

This is a tricky one, but if I had to create one it would be that everyone has to visit Australia at least once in their lives. I’ve been out twice and plan to go again early next year. It’s an awesome country, everyone is friendly and of course the weather is lovely too!

It does look great there, definitely on the bucket list! Why do you hate bananas?

They’re wrong on so many different levels! The texture, taste, the way they feel. Everything about them makes me heave! I like the banana sweets though!

What’s worth paying more for to get the best?

Computers! No question, I love Macs and it’s worth paying extra for the top of the range model!

I’m not sure Jamie Colclough will agree with you on that one! Have you returned to Subway yet?

No. They remembered my order, I know a turkey, ham and cheese flatbread isn’t too complicated but it’s the principle!

Turkey, ham and cheese on a flatbread. That’s awful…

Honestly, just try it and you’ll be converted!

I’ll stick to my meatballs for now thanks… If you could go back in time to witness any event, what would it be?

It’d probably be something football related, this year was nice, but who wouldn’t want to go back to ’66?

Funny, Ben Wood said something about watching the Ginger Messi’s equaliser one more time… How did you get the nickname ‘Chicken Man’?

Well, after the Subway incident, I needed somewhere else to go for lunch. People used to rave about the chicken goujon wraps from Wrights, so I thought I’d give it a go.

I’m not a salad or sauce fan so I literally just had a wrap with chicken. They found this quite funny and gave me the nickname Chicken Man!

Can you explain the car park incident?

We came back from a night out, I was slightly drunk and tried to walk to the taxi rank, it turns out I’d walked into the car park instead. I only knew my way around there in my car, so I had to walk around it like I was driving…

Edit- After speaking to some of my colleagues who were out with Shane on the night in question, it seems the alcohol may have had more of an affect on his memory than he thought… Here’s the true story as told by Jake Mallin! “It all started with Shane and his Hulk hands smashing his glass on the table. The shock that ensued also spilt Megan’s drink too.

After replacing them, Shane decided it was time to head home. Obviously, we don’t know exactly what happened when he left us, all we have are messages from Shane the next morning informing us that he was rudely woken up by a gentleman in the car park next to the pub! It turns out he’d fallen asleep amongst the parked cars! All he could remember was the taxi charged £25 to get back to Biddulph!”

Thanks for clearing that one up Jake! What do you love most about working at Click?

Everyone says the people, so I’ll try and be different! The opportunities offered here are great, there’s so much progression available and they want you to do well. Click are always sending people on training courses and bringing experts in to teach us new stuff.

Click Academy is huge too, I can go home and learn a completely new programming language, there aren’t many places that give you that freedom!

That’s a great point mate! It seems like no one is ever in a role for more than a few months before they move again!

Thank you to everyone at home for reading, if you’re itching to learn more about our office antics click here now to read our previous interviews or come back next week for another instalment of MTC!