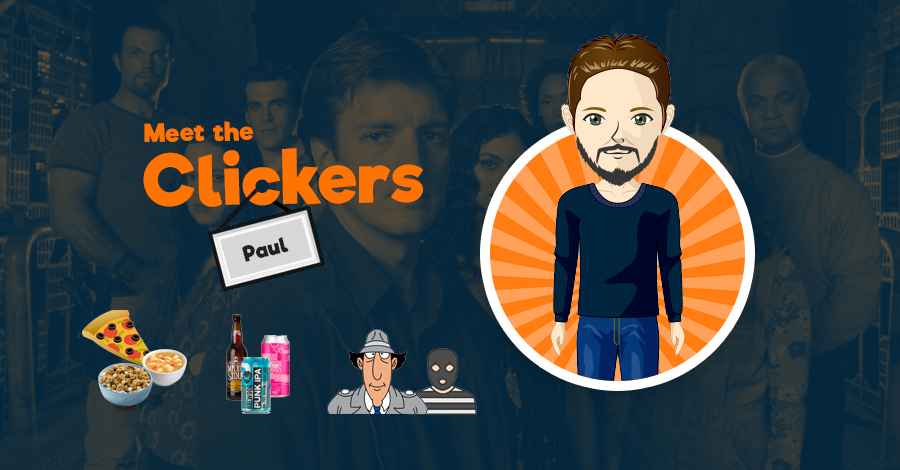 For Episode 41 of Meet the Clickers, we have Web Developer and beard lover Paul! He’s here to educate us on proper beer and his criminal mind!

Could you tell us a bit about your Click journey so far? How did you end up here? 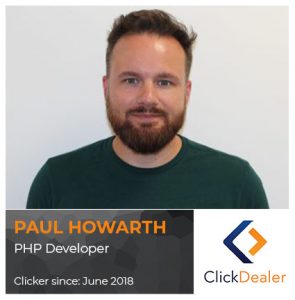 Well, I came out of university with a computing degree, I quickly realised I couldn’t just walk into a computing job, I did data entry for a couple of years, after that I got taken on by a guy who needed a Junior Web Developer. Since then I’ve always worked in smaller companies, with 3-4 other people. Click is the first job I’ve taken in a big company!

Could you tell us all what exactly your job is at Click?

I’m a Web Developer, working specifically within the maintenance team (which is by far the best…)

What is the best and worst purchase you’ve ever made?

The majority of my money is spent on technology, so it’s got to be something along those lines. My best purchase was probably my new house though! It’s in a great location and it’s got a warranty on it! After my last house I knew I needed something that wasn’t going to have a repair list the length of my arm…

My worst purchase would probably be something from Kickstarter… I’ve stopped recently, but when I had a bit of spare cash, I used to back a lot of things. You’d wait months for it to come and just be like, why have I bought this? I’m also a bit of a hoarder so most of them are still cluttering my house!

It could be worse, imagine if you’d bought a Port Vale season ticket like Ben Wood! What movie needs a sequel?

I know this isn’t strictly a movie (although the film Serenity was part of the series,) but I’ve always wanted more Firefly. This was a crime against Sci-Fi fans everywhere!

That’s a new one! I’ll have to give it a watch. Would you ever consider shaving your beard off?

Ohhh, no. In Uni I didn’t have much of a beard, it was just a close shave, but I’ve always had visible facial hair since I could grow it! I was an early bloomer, so I used to rock a goatee in school.

The school I went to was reasonably posh and although they didn’t have any rules on facial hair, you could tell they wanted it gone! Since then I’ve always had facial hair, from chin straps to sideburns. I’m so used to a long face now, I don’t think I’d recognise myself!

Wow! Hope there are some photos of those sideburns! What is okay to do occasionally but not every day?

I love pizza, I could eat it every day, but that would be bad…

As long as it’s not pineapple I don’t see why not?  I’ve been told you’ve got endless experience in web development, how did that all start?

I’ve always been more interested in the hardware side of computers, building them, reading about new stuff to put into my own. After University I wanted to get into web programming more, but unfortunately I needed more experience, so to start my career I took a job in data entry…

I then got a lucky break with a guy who ran his own web business. He was the sales side of the websites and took me on as a Junior Web Developer. After that I took on a lot of roles from client management, to sales and even becoming a Director.

Erm, I don’t think so… It’s an interesting question, cereal on its own obviously isn’t soup, but with milk it could be. Gazpacho is served cold, so it’s almost the same thing? The cereal sort of acts like croutons!

I see what you mean! I’ve heard you’re a bit of beer connoisseur, which is your favourite?

Wow! That’s an impossible question. I’ve got a little app on my phone that I use to rate my beers, there are very few that I’ve rated 5 stars out of a four-figure list… I can’t name a specific beer as my favourite, but there are two types that I really like.

The first one is an IPA, it’s usually very cloudy, from a Manchester brewery called Cloud Water. My other beer is Imperial Porters, they’re ten or more percent. They’re thick and dark with some coffee tones. They’re normally aged in whiskey barrels, so they have a bourbon taste.

Would you rather be invisible for a day or fly for a day?

I think it’s invisible. Flying is cool, and it’d be useful, but being invisible has some interesting possibilities, mostly criminal… Like you could just walk into a bank and take a load of money! Flying would be alright but it’s not going to make you any money!

You’ve definitely got a cleaner mind than most! What do you love most about working at Click?

It’s been great to work in an environment with lots of staff, its nice meeting new people, but it’s even better to work in a team on a project. In previous jobs its nearly always been me working alone, so to have that support and knowledge around you makes things so much easier. I know that now I can bounce ideas of people and they’ll come up with some great ideas, whereas before I’d literally speak at someone until I solved it myself!

At the start I wasn’t sure how I’d adapt to working in a big office with loads of people, but it’s been so easy to fit in. With Click I can see where we’re heading, there’s building blocks already set out to guide us in years to come. I’ve never really had that and I’m enjoying it.

Perfect Paul! You’re not wrong, there’s always someone on hand to help when you’re stuck!

Thanks for reading guys! Make sure you check back next week for episode 42! If you’re itching to find out more about the Clickers, click here for our earlier instalments!