Used car dealers should hold their nerve and resist the temptation to discount to get a sale but instead demonstrate extra value and be able to justify their prices as the market faces outside pressures.

The message from Rupert Pontin, Director of Insight at Cazana, is that with downward pressure on forecourt prices from a slowing of consumer demand fuelled by the Brexit situation, it makes little sense for all dealers to cut prices because the relative competitiveness will be the same, just at a lower level.

He said they need to show `tenacity and resilience’ before adding: “It is important to note that whilst retail pricing is reasonably steady, the compromise has been in how long it has taken to sell each car. This is the difficult piece at the moment where the sales teams are having to demonstrate extra justification and greater value for the customer into each deal. The reality is that it may not be worth dropping the retail price if all the dealers are facing the same situation as this does not guarantee a quicker sale.”

Elsewhere in Cazana’s monthly analysis of the used car market, he notes that late plate models (12 months/12,000 miles) seem to be holding onto their value and have only lost a single percentage point of original value cost over the past year. In contrast, ex-fleet and PCP cars coming back are being harder hit because of the healthy new market in 2016. 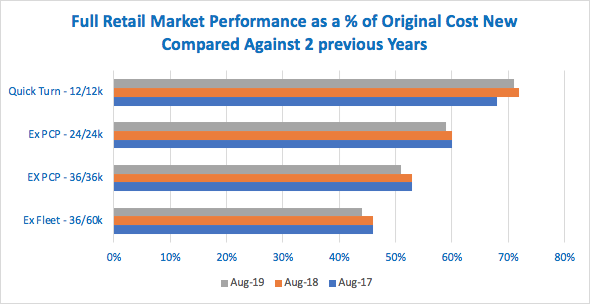 Not worth dropping the retail price

Rupert said: “The data shows that whatever the age and mileage profile, retail pricing is now falling away. Of note is the fact that the later plate cars seem to be holding value slightly better and have dipped in pricing terms by a single percentage point of original cost new. Three-year-old cars from both the private and fleet sector are being affected more severely. This will in part be due to the level of new car registrations that took place in the new car market 3 years ago.”

Turning to the various fuel types, 12-month old pure battery cars are benefitting from improved range and their values are (a) stable and (b) substantially higher than earlier models.

Hybrids are doing well as they find more favour among drivers with Cazana saying `Looking at the hybrid data it is evident that there is greater pricing stability as all lines remain fairly flat across the twelve-month period. There is also a consistent gap between the value of each age and mileage profile which is similar to the pattern exhibited by ICE cars. Finally, there has also been consistent retail price increases at all age and mileage profiles which supports the view that consumer demand for alternative fuel vehicles is increasing.’

Looming over everything though is the political situation and until this is clarified consumers will continue to be wary of big-ticket purchases and Rupert doesn’t forecast a significant improvement in market sentiment in Q4.

He said: “This time of year may traditionally be more difficult from a sales perspective but the political and associated economic challenges are an unwelcome complication. As it stands today this position looks set to continue until early 2020. Indeed, we may see another general election and new prime minister coming to the fore to conclude the Brexit process in the coming months and as such stability and recovery seem quite a way away.”

For more information, please contact the Clickers either via help@clickdealer.co.uk or 01782 478 220.