Diesels Could Be Making A Comeback In The Used Car Sector

Dealers who push the eco-benefits and cost advantages of the latest Euro 6 diesel could see their sales rise as the message gets home that these engines can be cleaner, and cheaper, to run than a petrol or hybrid.

For the past four years (since September 2015) all-new diesel vehicles sold in the UK have had to meet the tougher emissions standards and the steady flow of them being remarketed is now set to be joined by a healthy supply coming back from four-year lease contracts.

Retailers making the most of the low emissions/high mpg message of Euro 6-compliant diesel vehicles could be rewarded with better sales if they are seen as being the best `green’ solution until hybrids and EVs really appear in significant volumes among owners in the second-hand sector, something which many believe is still years away. 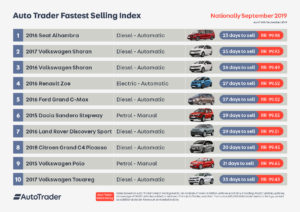 Pendulum Swings Back To Diesel

One remarketing platform, Shoreham Vehicle Auctions, says the arrival of Euro 6 cars and vans in big numbers creates an opportunity for dealers.

“Despite the tipping point that has arrived for EV vehicles, we will see the diesel market recover and, due to the reduction in new diesel sales, the pendulum will swing back to an increase in demand in the second-hand market.

“The new generation of petrol owners in an SUV will realise the extra running costs versus diesel, and when the green light is given by the government that these new generation diesel vehicles are actually helping the country reduce CO2 and NOx emissions, it will be accepted as a ‘green’ solution until EVs fully establish themselves.

“We must remember that petrol powertrains’ generate CO2 and NOx emissions too and, arguably, have progressed less than diesels in recent Euro standard iterations.”

Auto Trader said that for the second consecutive month, the 2016 SEAT Alhambra (diesel, automatic) is the UK’s fastest-selling used car, and that if correctly priced, bigger MPVs and SUVs should sell sooner than smaller hatchbacks or five-seaters. Seven seems to be the magic number with the Alhambra joined in the top three by its seven-seater stablemate the Volkswagen Sharan, with the 2017 and 2016 models ranked second and third.