Independent retailers held fractionally more used cars and vans last month than a year ago. However, they saw a much bigger stock increase relative to franchised dealers and also to supermarkets. Both held fewer vehicles and took longer to sell them.

The latest monthly market analysis by Motors.co.uk reveals a typical stock pool among independent used car dealers up by seven per cent from a year ago and the same as June, with 46 cars on the forecourt. The time to sell remained the same year-on-year, at 41 days.

However, the biggest change was in the supermarket sector. Here Motors.co.uk say that average stock levels dropped by nearly five per cent, to 674, but the shocking figure is the increase in time to sell, up 15 per cent to 31 days. 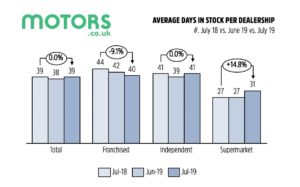 “Car supermarkets had a challenging July with lower stock levels resulting in cars spending an average of four days longer on forecourts. Their reduced stocking levels could be reflecting just how competitive it is for retailers to source ready to retail cars at a time when used margins are tight across the board.

“Both franchised and independent forecourts held up well in July seeing little year-on-year and month-on-month variance in stocking levels, with the former also seeing a welcome improvement in days to sell in what is always a challenging month for the retail market as the holiday season gets underway.”

Both he and many other commentators have remarked on how resilient the used car market is given the collapse in the new car sales and falls in other retail sectors. The SMMT reported a Q2 shrinkage of 2.8% to 2.03 million and YTD volumes down 1.7% to 4.05m.

“Whilst used car sales appear to be holding up, despite market uncertainty, we are aware that many dealers are having to work harder to deliver similar year-on-year levels of sales to counter challenges in consumer demand.” 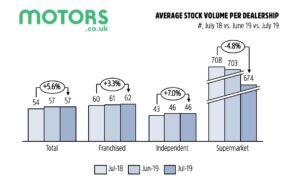 Once again electric vehicles (EVs) were the fastest-selling used cars averaging just 35 days in stock, an improvement of 46% on the 51 days they averaged in June 2018. EV days to sale have reduced every month since April when they averaged 41 days.

The fastest-selling used car in July was the Vauxhall Astra, averaging 23 days in stock, followed by the Mercedes-Benz GLA and Hyundai Tucson which both took 25 days.