Click Dealer came from behind twice to beat Codeweavers 4-2 at Pershall Park with a double from Jamie Baker and one each from Lee Rawlinson and Jack Ganley. 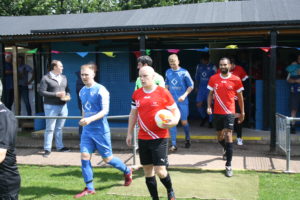 The Clickers went behind 20 minutes in after dominating the opening period, having been camped in the Codeweavers’ half. A quick counter-attack from Codeweavers turned the game on its head following a sliced clearance from Ben Wood, as Jack Davenport latched on to the ball and slotted past goalkeeper Spencer Martin. However, Click continued to dominate play, Hassan Ali getting in behind on a couple of occasions, but he was unable to get the goal Click deserved.

Changes in the second period saw a new-look left flank for Click Dealer with Jake Booth coming in at left midfield and Josh Locke at left-back. Click continued where they left off and applied pressure high up the pitch. Lee Rawlinson and Jake Booth both had opportunities but had to settle for corners after good defending from Codeweavers. A beautifully whipped ball in from Josh Locke looked to have finally unlocked the Codeweavers defence, but Jamie Baker directed his header narrowly over the bar from close range.

Looking threatening already from corners and balls into the box, Joe Podmore stepped up over a freekick from 30 yards out. His delivery was again met by the head of Jamie Baker who got Click off the mark. 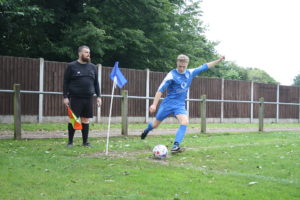 The lead didn’t last long though, with Codeweavers responding well and playing some lovely one-touch football in the Clickers’ half. With a touch of luck about it, the ball found its way to a Codeweavers striker on the edge of the 18-yard box who finished clinically to give his side the lead once again.

Click threatened to get another with Ollie Moxham breaking into the opposition box and winning a corner that led to another headed effort from Jamie Baker going narrowly wide.

With only five minutes remaining of the second period, a surging run from Lee Rawlinson down the left saw his cross go beyond the goalkeeper and into the back of the net, bringing the score to 2-2.

Looking to capitalise on a good spell of the match, Click kept pushing for another goal. It came following a delightful corner from Podmore and for the second time in the game, Jamie Baker escaped his marker and nodded Click Dealer into the lead with his header glancing the underside of the crossbar. 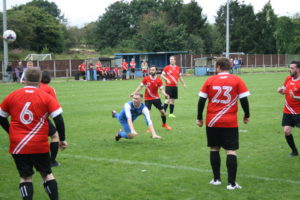 The final third of the game didn’t show any signs of dropping in intensity, both teams fighting hard to control the ball. Codeweavers put together a series of attacks that threatened to get in behind the Click Dealer backline, but unwilling to sit on a one-goal advantage, Click continued to push forward. 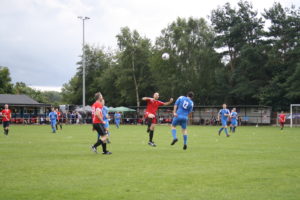 Alex Baker and Ben Wood closed up shop at the back, both using their strength and speed to make some important last-ditch tackles. Codeweavers continued to push for an equaliser. Following a ball into the box Spencer Martin pounced to claim it as he had done magnificently all game. Only this time the linesman flagged to signal a penalty and he judged the goalkeeper to have taken out the Codeweavers striker before getting to the ball.

Jack Davenport looked to cap off a good game by converting the spot-kick but instead saw his effort fly high over the crossbar, much to the relief and pleasure of the Clicker players and fans. The game was put to bed minutes before the final whistle with a phenomenal run from midfielder Jack Ganley, dribbling past five Codeweavers players and then finding the bottom left corner. 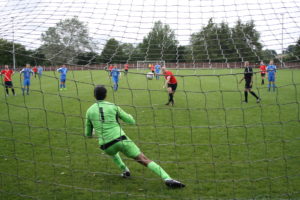 The ref blew his whistle to signal the end of a fantastic game with some great goals and drama, but in the end,  it was a well-deserved victory for Click Dealer who retained the Jude’s Rimet Trophy.

Click Dealer Director, Gerry Moxham presented the trophy to Captain Jamie Baker to a huge cheer from the crowd as the trophy was lifted. 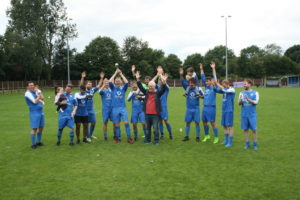