After throwing the script out the window on the opening weekend at Brands Hatch two weeks ago, the Kwik Fit British Touring Car Championship (BTCC), will resume this weekend at Donington Park (27-28 April), as the battle to get some early points on the board continues.

After a successful first race, ending in a hard-fought podium finish, Jake Hill of Trade Price Cars will want to continue applying pressure to the current leaders. It really is all to play for after three rounds in Kent yielded three different winners, with a victory apiece for Josh Cook, Andrew Jordan and Rory Butcher after Ash Sutton had taken pole position the previous day. It wasn’t just the top step of the podium, but the whole rostrum that proved to be an ever-changing battleground, as Jake and seven other drivers climbed the steps to celebrate a memorable race day. Read more about the race here

Donington Park is a renowned fans’ favourite, as well as a favourite of many of the championship’s drivers and it’s a circuit that rarely disappoints in terms of on-track action. Circuit owner MotorSport Vision continues to ring the changes in a bid to improve the fan experience following its acquisition of the world-renowned venue a couple of years ago. For 2018, huge crowds enjoyed new grandstands, a restaurant and additional facilities accompanying the spectacle offered up by the BTCC and accompanying TOCA package and they can expect more welcome improvements to spectator areas – including a brand new spectator entrance to the paddock on this visit.

After a truly remarkable 2nd and a 4th place finish at Brands Hatch, coming from 15th in the grid, Jake Hill will definitely be among the favourites to mount a challenge on the current points leaders. Trade Price Cars teammate, Mark Blundell, will also go out to make amends for a disappointing start to his BTCC career, and with his level of ability and experience, coupled with the unpredictability of the BTCC, he will certainly fancy his chances of causing an upset.

Battling Against The Home Advantage 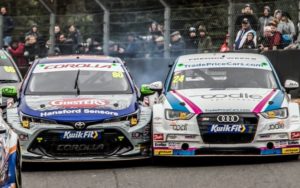 Donington Park will open its doors to many fans and supporters this weekend, but 4,500 of them will consist of staff and their families from Toyota Manufacturing UK (TMUK), based at nearby Burnaston. This strong following will be cheering on Team Toyota GB and Driver Tom Ingram, with the Japanese marque back in the BTCC this year as a Manufacturer for the first time in more than two decades.

Ingram, who has been racing alongside Jake Hill since 2009, is delighted to be able to count on such backing and is hopeful he’ll be able to produce the goods in the new Corolla to send the hordes home happy.

“It’s going to end up being our adopted home circuit really!” said Ingram. “Speedworks Motorsport has historically counted Oulton Park as its ‘home ground’, but with our Toyota backing and 4,500 employees and their families coming to support us from TMUK, that’s all about to change!”

Click here to buy tickets for this weekends event

As is the case for each of the BTCC’s ten events, everything is broadcast live and free-to-air by the championship’s longstanding partner ITV on ITV4, the ITV Hub and online at itv.com/btcc. The Clickers will be sending their best wishes to the Trade Price Cars Team, and we hope to see them climbing up the podium steps once again!