Watch Out for Trade Price Cars Racing This Weekend at Brands Hatch!

Trade Price Cars are no stranger to this elite racing series having been sponsors for a number of years, however, they decided 2019 was the right time to enter their own team, with Amd Tuning to provide technical assistance. Over the past month the squad has worked tirelessly, testing their cars in a number of locations around the UK.

In the driver’s seats are Jake Hill and former F1 racer, Mark Blundell. Jake Hill, son of racing driver and motorsport commentator Simon Hill, is no stranger to Brands Hatch, last year he secured the best result in his BTCC career to date, finishing in second. He showed top ten pace in the Season Launch test and is eager to impress further throughout the season.

While Mark is no stranger to the race track, this will be his first ever run out in the highly competitive world of BTCC. Having competed at the peak levels of motorsport, including Formula 1 and winning the Le Mans 24 Hour, the 52 year old is ready for the challenge. Leading up to this weekend he’s been testing at a number of circuits and even lapped within a second of the record-breaking fastest lap set when the full field was out at Brands Hatch last week. 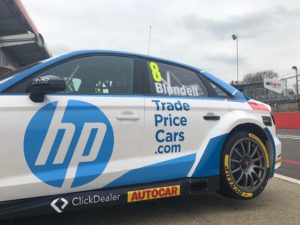 Click Dealer’s Managing Director Gerry Moxham said: “The work Dan, Trade Price Cars and AmD Tuning have put into this car over the winter to get it where it is now is simply staggering. Jake and Mark are both fantastic racers and I really believe they can record three solid points finishes this weekend.

“We’re proud to be a sponsor for the campaign and we hope they can turn all their hard work into points on the board this season!”

All three races this weekend, which are scheduled for 11:30, 14:15 and 17:05 on Sunday, will air live on ITV4 and on ITV.com and The Clickers will be watching on, shouting at their TV’s for three Trade Price Cars Racing victories!